JACK – The prototype, designed in Aix-en-Provence, was previewed at thecamp

After a year of R&D, TBC-France, a subsidiary of the French-Canadian group TBC-Monde that operates in Asia, Latin America and Africa, presented “JACK” on May 17, 2018, its robot dedicated to the surveillance of sensitive sites. The prototype, designed in Aix-en-Provence, was previewed to fifty European industry, security and luxury contractors at thecamp. The potential of the region and the support provided by Provence Promotion and its partners weighed heavily on TBC-France’s decision to house its head office in the Duranne business park.

JACK’s mission is to perform random patrols and confirmation checks

Before an astonished audience of safety, security and procurement managers from all over Europe, the autonomous surveillance robot “JACK” made its debut in Aix-en-Provence on May 17, 2018, for an exclusive demonstration of its capabilities, before its planned commercialization in late 2018.

Equipped with artificial intelligence, eight cameras, three movement speeds (3, 10 and 18 km/h) and an extended range of 10 to 12 hours, JACK’s mission is to perform random patrols and confirmation checks.

In addition to importing an American robot for monitoring less sensitive sites, Renato Cudicio, president of TBC-France, has designed a robot that meets the specifications of the European market, allowing it to cover sensitive, critical and OIV sites (Operators of Vital Importance, such as ports or military sites), as well as logistics platforms. “JACK is made in Provence. We have been in the Duranne area, near thecamp, for one year because of the proximity of our many suppliers in the region, as well as our potential customers in the field of security and defense. Property costs and quality of life also influenced our decision to house the R&D center and head office in Aix-en-Provence instead of Paris or Le Havre,” said Renato Cudicio, CEO of TBC-France.

“Property costs and quality of life also influenced our decision to house the R&D center and head office in Aix-en-Provence instead of Paris or Le Havre,” said Renato Cudicio, CEO of TBC-France.

A member of the “Invest in Provence” community 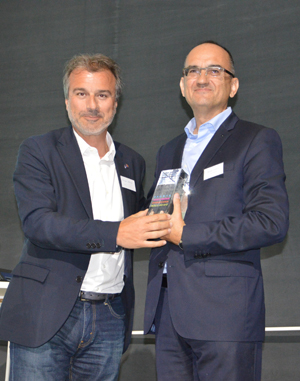 Other key factors won over Canadian shareholders: Provence Promotion’s contact with the Marseille Chamber of Trade and Crafts, local recruitment firms and manufacturers, as well as the presentation on real-estate offerings by Pays d’Aix Développement, a local economic development agency. “We helped TBC-France integrate into the local entrepreneurial fabric by introducing them to the innovative ecosystem, including the SCS, Optitec, Safe and thecamp centers of competitive excellence at the Technopôle de l’Environnement Arbois-Méditerranée. We have provided them with support in their recruitment strategy,” explained Jean-Luc Chauvin, President of the Marseille-Provence Chamber of Commerce and Industry. Also President of Provence Promotion, he awarded Renato Cudicio the “Invest in Provence” label, making him a member of the community as a foreign investor in the Aix-Marseille-Provence region.

“Entrepreneurs are the ambassadors of our region,” added Jean-Luc Chauvin, who has selected TBC-France to act as an ambassador for Provence to Canadian companies.  TBC-France, which employs a dozen people, plans to recruit 7 additional employees in 2018.